Susan G Komen is the world's largest nonprofit source for funding toward the fight against breast cancer. 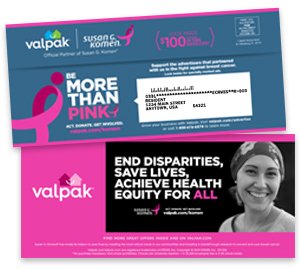 We are honored to be an official partner of the Susan G Komen organization to help raise awareness and donations to aid in the fight against breast cancer.

Valpak, North America’s trusted leading direct marketing company, has announced its partnership with Susan G. Komen, the world’s largest breast cancer organization, as of May 22, 2018. Together the two will be dedicated to making a difference this National Breast Cancer Awareness month by taking action and becoming “More Than Pink” to aid in the fight against breast cancer.

This October, the iconic blue envelope of Valpak will become pink in support of the 1 in 8 women who develop breast cancer at some point in her life, and the countless loved ones affected by the disease. This collaboration marks the first time Valpak has created a “Cause Month” envelope as “Valpak Goes Pink” that will encourage donations and participation from across North America to put towards finding a cure. With a significant number of Valpak employees affected by breast cancer, Valpak is determined to stand up against this awful disease alongside Komen in order to save lives and become one step closer to ending breast cancer.

The Susan G. Komen organization funds more breast cancer research than any other nonprofit and has set an ambitious goal to reduce the current number of breast cancer deaths by 50% in the U.S. by 2026. Komen was founded in 1982 by Nancy G. Brinker, who promised her sister, Susan G. Komen, that she would end the disease that claimed Susan’s life; that promise has become Komen's promise to all people facing breast cancer. Visit komen.org or call 1-877 GO KOMEN. Connect with us on social at ww5.komen.org/social.